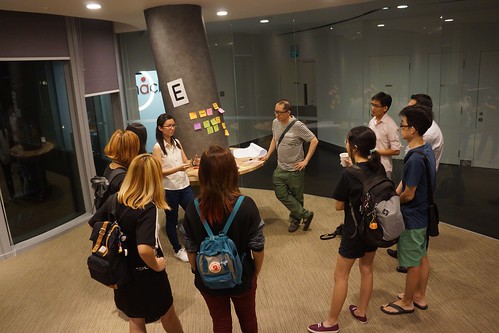 Design patterns are a set of common practices and solutions that our users understand. Examples of pattern include iOS Human Interface Guidelines and Google Material Design. Patterns seems to work in most situation but what happen to client’s dying wish to include revolutionary interaction or to be the designer who introduced the killer interaction. When do we introduce new interaction and when should we follow patterns? Discussion

Here are what fellow designers think about this topic. 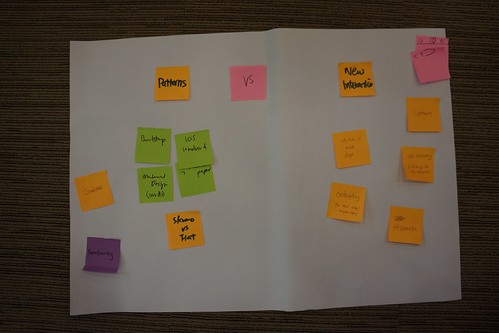 Familiarity and being comfortable

Most users and clients are already familiar with them. They are the best practice and no tutorial required. ?Users probably feel comfortable using them.

The forces behind the use – Pull (intuitive) and Push (need)

One of the examples is Window 8. The switch from windows original look to the tile based UI is huge. Although users are used to the old interaction and layout, they are forced to change their mental model to match with the new one. This is an example of need. Company can push their users to learn new interaction but they may not be happy.

The intuitive interaction, on the other hand, pull the users towards the new interaction. We discussed two ideas – Discovery and On boarding process.

Rather than forcing the user to interact with the new way immediately, some application let their users discover the feature. Some shared how they discovered the hidden features/shortcuts as they are interacting with application like Facebook. This is mainly for hidden shortcuts such as enlarging photo.

This highlights the existence of ?features and explains to users how a feature is used. We briefly touched on the ?type of features that requires on boarding, ?feel free to continue the discussion here.

Context seems to recurring point. When we discussing which one is better than the other, the question would be who and what are we designing for.

Background on why I asked this question

My team is designing interaction for Mobile Augmented Reality(MAR) on Mobile phone/ tablet. For MAR to work, we need a marker that trigger the content like URL of websites. Users view the content in 3D Space relative to?their mobile devices and marker. Most of the MAR interaction revolves around “point and show” interaction where users point their devices at a marker and the content shows up. The users do not interact with content.

My team wanted to let users interact with content. Our users view content that are augmented in 3D space and interact with them. Here’s the problem: We observed that our users are divided between those who used the tablet as mouse/cursor (intended interaction) and others who used it like a steering wheel .Those who got the idea of mouse/cursor interact without trouble, those who control it like a steering wheel did not get the feedback they wanted and struggled to understand how it works.

Some of the pointers from the group:

Feel free to add on 🙂